Camomile [Chamomilla recutita (L.), Rausch.] is an important medicinal plant, whose multitherapeutic, cosmetic, and nutritional values have been established through years of traditional and scientific applications (Mann and Staba 1986; Schilcher 1987). Reports concerning the effect of nitrogen on growth, yield, and content of the active substances in camomile is contradictory and fragmentary. The objectives of this study was to compare the response of a diploid and two tetraploid camomile genotypes to low and high levels of nitrogen fertilization. A two year (1986-1987) pot experiment was conducted with three camomile genotypes under 5 different N levels.

Seeds of three camomile genotypes, a diploid (2n=18), and two tetraploids (BK2-39, and R-43 2n = 36) were obtained from the breeding program of the Institute of Agronomy and Plant Breeding I, Justus Liebig University, Giessen. The essential oil composition and morphology of these lines were previously described (Letchamo and Vömel 1989; Letchamo 1990).

Seedlings were raised in a greenhouse and transferred to 5 liter Mitscherlich pots filled with 2.0 kg of soil (RH loess serosiom) and 4.0 kg of sand. Four plants/pot with 8 replications of each variant were planted in spring 1986 and 1987. Five levels of N (NH4NO3) were used as follows. N0 = no nitrogen, N1 = 0.4 g N/pot, N2 = 0.8 g N/pot N3 = 1.2 g N/pot and N4 = 1.6 g N/pot. During planting, we applied 1.5 g/pot CaCO3, 5.0 g/pot Fe, 5.0 g/pot Mn, 2.5 g/pot Cu, 2.5 g/pot Zn, 0.5 g/pot B, and 0.05 g/pot Mo. The flowers were hand harvested at the medium stage of their development (Letchamo 1990) and dried at 38°C for 72 h. Circulatory steam distillation (2.0 g of the dry sample) was carried out in a Neoclevenger type apparatus (in 500 ml volume round bottomed flask with 300 ml deionized water) for 2 h using n-Pentan as a distillation receiver (Hölzl and Demuth 1979). The essential oil content was determined gravimetrically. Essential oil samples were diluted in 1 ml toluol and analyzed using Carlo Erba Instruments, Model GC-6000 Vega Series-2; equipped with a flame ionization detector (FID) interfaced with a Spectrophysics Integrator Sp. San Jose California for chromatography data acquisition, processing, and quantitation. A 30 m x 0.25 mm id fused silica capillary column packed with a stationary phase of 0.25 µm thickness was used for the separation of volatiles. Carrier gas flow rate was 30 ml N/min; sample size was 1 ul direct injection with Hamilton Microliter syringe. Injector system was split-splitless with 1:20 ratio. Injection port temperature was 220°C , detector oven temperature was adjusted to 240°C. Column temperature was programmed at 120°C for 0 min., 120° to 150°C at 30°C/min for 2 min., 150deg. to 175°C, 10 min., 175°C to 220°C at 30°C/min. n-Hexadecane was used as an internal standard. The data were analyzed using analysis of variance following established statistical procedures (Dospechov 1979; Köhler et al. 1984) using SPSS/pc+.

Plant height, the straw yield, number of productive tillers, primary branches, and volume of the flower heads significantly increased due to the increased levels of N application (Fig. 1, 2). Similar results were reported by Franz and Kirsch (1974) and Meawad et al. (1984) by applying N with K and some growth regulators at different levels respectively. Maximum response for straw was not reached by BK2-39 and R-43 even at N4 (Fig. 1, 2). The straw yield of tetraploids, however, showed a significant growth with increased N application up to N4 (Fig. 2). A remarkably relaxed vegetative growth with thick leaves and branches was observed particularly by BK2-39 and R-43 at N4. At this N concentration the two tetraploid genotypes flowered ca. 8 days later than the control and lower levels of nitrogen (N1, N2, and N3) and remained dark green throughout the vegetation period.

The number of the flower heads and the drug yield (g/pot) significantly increased due to additional levels of nitrogen application in all the genotypes (Fig. 3). The drug and straw yield of the diploid did not show much difference between N3 and N4. A difference of 1.9 and 6.1 g/pot between N3 and N4 was obtained for drug and straw, respectively. The maximum drug yield response for this genotype was reached at N3, as further additions of N did not result in further increase (Fig. 3). Similarly, the drug yield difference between N3 and N4 was only 0.8 g/pot of the tetraploid BK2-39, with a maximum being at N3. The weight of individual flower heads increased only up to N2 in the diploid and BK2-39 and up to N3 in R-43. The difference was 11.2 g/pot for BK2-39 and 11.8 g/pot for R-43.

Nitrogen fertilization increased the percentage (Table 1) and absolute yield of essential oil (Fig. 3). The contribution of N to the essential oil increment was 42% in the diploid, 25% in BK2-39, and 27% in R-43. There was no change in the composition of the essential oil due to the differences in N levels. A sample chromatogram of a tetraploid camomile essential oil is shown in Fig. 4.

The lowest content of (-)-alpha-bisabolol in the diploid and tetraploids was achieved at N0 whereas the highest content was obtained at N3 from all the genotypes. With further increment of N levels (N4), a declining effect in (-)-alpha-bisabolol content was observed (Table 1). The overall application of N contributed to 41% increment in the diploid, 19% in BK2-39, and 17% in R-43.

Similarly, the lowest chamazulen content for all the genotypes was at N0 (Table 1) with a peak at intermediate N level depending on genotype. These results were in agreement with field experiments of Meawad et al. (1984). The overall contribution of N to Chamazulen increment was 17% in the diploid, 15% in BK2-39 and 28% in R-43.

We conclude that nitrogen application during growing conditions has a positive effect on the yield of camomile genotypes and favors the content of its active substances but, the response is affected by genotype. Establishment of the optimum level of N should be a compromise between drug yield, content of the essential oil, and the active substances in the flower heads.

Table 1. Effect of nitrogen on the content of essential oil (%) and active substances (mg/100 g drug) in camomile genotypes (a mean of 2 years), Rauischholzhausen, 1986-87. 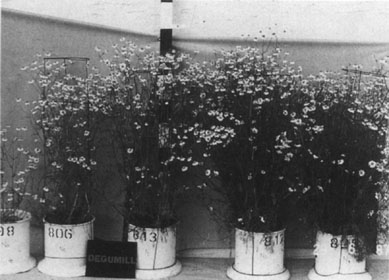