Basil (Ocimum basilicum L., Lamiaceae) has long been acclaimed for its diversity as a source of essential oils, its flavor and delicacy as a spice, and its beauty and fragrance as an ornamental (Simon et al. 1990). Basil is extensively used by the perfume, pharmacy, and food industries for its natural aroma and flavor (Darrah 1980; Simon et al. 1984). There are many variants of basil which exhibit a wide range of leaf color (green to dark purple), flower and bract color (red, white, lavender, or purple), and which vary in growth characteristics and aroma making it an increasingly popular culinary and ornamental herb. Basils are annual plants and, generally, flowering commences about 80 days after planting in late spring. The flowers as well as the leaves are highly aromatic.

Most basils are grown as culinary herbs primarily because of their unique aromas and fragrances, which can be strikingly similar to the aroma of cinnamon, licorice, lemon as well as the more traditional sweet basil aroma which is mainly due to a combination of linalool, methyl chavicol, and 1,8-cineole. Basils, which exhibit a lemon aroma (due to the presence of citral), are commercially available and are characterized by their small stature, early flowering, small and narrow leaves, and low essential oil and citral contents. In 1988, we compared three field-grown lemon basil cultivars, and found that the citral content in the essential oil was 12.6% (Companion Plants), 14.4% (Lake Valley), and 32.4% (Burpee Seeds). In 1989, we identified a single robust and tall plant with a very strong and distinct lemon fragrance within our germplasm collection. This individual plant was found within an extensive intermated germplasm collection of Ocimum spp. and served as the parent to derive a new type of lemon basil for the culinary and ornamental herb market. We were also interested in comparing the effect of steam versus hydrodistillation on oil yield and composition.

In 1989, an individual plant with strong lemon aroma and a distinct upright growth habit with larger leaves than previously found on available lemon basil cultivars was identified in a genetically broadbase germplasm collection of basil (Ocimum spp.) growing at Lafayette, Indiana (Oakley silt loam soil). The selected plant was potted and placed in a greenhouse, isolated from all other basils. Selfed seed (S1) was collected in March, 1990, and sown in the greenhouse on Apr. 20, 1990. One month later, the 80 plants obtained were transplanted into the field, eight rows of ten plants each. At full bloom (July 16), the foliage and flowers of each plant were harvested (from 20 to 25 cm above ground), and immediately dried at 37°C in a forced air dryer for 15 days. Essential oils were extracted by hydrodistillation via clevenger trap according to Charles and Simon (1990). Oil content was measured volumetrically (% v/dry wt), and oils stored in Teflon sealed silica vials at 2°C in the dark. Essential oil composition was determined using a Varian 3700 GC equipped with FID and a Varian electronic 4270 integrator as reported (Charles and Simon 1990). Identification of citral (= neral and geranial) was verified by the use of standards and with a Finnigan 4000 GC/MS as described (Charles et al. 1990; Simon and Quinn 1988).

From among the 80 field-grown plants in 1990, five plants were selected for further development based on plant type, visual appearance, essential oil content, aroma, and citral content. These plants were vegetatively propagated and greenhouse-grown in isolation during the Fall of 1990 and second generation selfed seed (S2) collected in March 1991. These five lines and remnant seed of the original plant (check) were field evaluated in a completely randomized block design with three replications in 1991. Each line was transplanted into five-row plots, ten plants per row, 46 cm between plants and 91 cm between rows on May 22, 1991 (Fig. 1). Plant height was estimated by measuring two random plants from each of the five rows. A relative measure of the leaf size from each line was estimated by collecting two fully mature leaves from a randomly selected plant in each of the five rows per plot and measuring the total leaf area using a LI-COR Model 3100 area meter. From July 9 to 23, when plants where in full bloom (Fig. 2), the three central rows were harvested in bulk, cutting the plants at ground level, and all the biomass weighed fresh and then immediately distilled to collect the essential oils using a 500-liter portable steam distillation unit (Alkire and Simon 1990) at 0.56 kg/cm2 for 2 h. On July 12, ten plants from the first row of each 5-row plot were individually harvested, cutting them 20 to 25 cm above ground, dried at 37°C in a forced air dryer from 15 to 20 days and the oil extracted using 40- to 75-g samples in 2-liter clevenger trap hydrodistillation units ran for 1.25 h. Oils were stored and analyzed as described earlier. The last row of each 5-row plot was left for seed collection.

In 1990, plants were first evaluated for visual appearance and aroma. Plants which had foliar discolorations, exhibited disease symptoms or any other irregularities were rogued. Variation was high in all growth and oil characteristics in the segregating lemon basil population in 1990. Mean growth characteristics were as follows: plant height 55 cm; fresh weight 256 g; dry weight 31.4 g; oil yield 0.69% (v/dw); and citral content 67.2% of total essential oil. Five plants (Plant No. 47, 48, 75, 77, and 78) with 76.4 to 78.7% citral and 0.44 to 0.75% (v/dw) essential oil content were selected.

In 1991, significant differences among the five lines (S2) and plants derived from selfed seed from the original plant (check) were observed for foliage yield, plant height, days to 50% flowering, uniformity, and essential oil yield (hydrodistillation) (Table 1, 2). The lines did not vary from the original plant selection in relative leaf size and citral content as extracted by steam distillation.

Citral content was about 14% lower in all lines and the check in 1991 compared to 1990, which we presume was due to the more stressful season with average high day and night temperatures. The effect of seasonal differences on citral content is unknown. The original plant (check) flowered about 4 to 7 days later than the selected lines. Lines 75, 77, and 47 were most uniform (Table 1). Essential oil yield correlated positively with plant height and foliage fresh weight and negatively with days to 50% flowering (Table 3).

After two cycles of selfing and selection, we identified five uniform lines of lemon basil with desirable aromatic, horticultural, and ornamental characteristics. This is the first report of a tall highly aromatic lemon basil that has potential as an ornamental culinary herb. Plants exhibited a strong pleasant lemon aroma, and compared to commercially available lemon basil cultivars, had larger leaf size (similar to sweet basil genotypes), and taller stature. Both the available cultivars and the new lemon basils described here, have attractive white flowers (Fig. 2) which continue to bloom as the plants continue to grow until frost. Each line had a distinct lemon fragrance with a minimum citral content of 65% in 1991. All the lines were highly aromatic with essential oil contents of 0.79 to 0.87% (v/dw) in 1991. Each line was highly vigorous with plants reaching heights of 58 to 65 cm in 1991 (Fig. 1, 2). All five lines appear superior to the original plant (check), with lines 75, 77, and 47 the most aromatic, vigorous, and uniform.

Table 2. Effect of the extraction method on the essential oil yield and citral content of five second-generation sister lemon basil lines and the parent line evaluated in 1991.

zExtracted by steam distillation.
*, **Levels of significance different from zero at probabilities of 0.05 and 0.01, respectively. 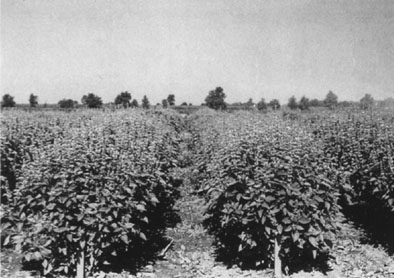 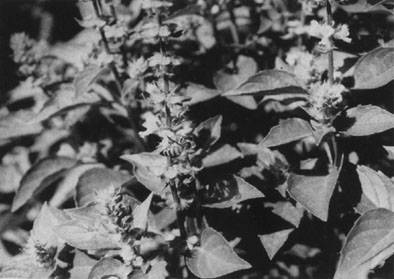 Fig. 2. Close-up of an individual plant of lemon basil.