Evaluation of Cucumis metuliferus as a Specialty Crop for Missouri

African Horned Cucumber (Cucumis metuliferus E. Mey. ex Naud. Cucurbitaceae), is a vining plant that produces an edible fruit for human consumption. The common name kiwano, was given to the fruits by promoters in New Zealand in order to market the crop in Japan and the United States (Morton 1987; Sweet 1987). Presently, kiwano is marketed as a specialty crop throughout the United States (Fig. 1). Part of its success is due to effective marketing techniques by specialty producers, packers, and the significant increase in the importation of exotic fruits and vegetables into the United States.

Seeds from 26 Cucumis metuliferus plant introductions obtained from the North Central Regional Plant Introduction Station, Ames, Iowa, were planted in the greenhouse Mar. 28, 1990, evaluated for number of leaves and vine length, and transplanted in the field on May 28 at Lincoln University's George Washington Carver Farm, Jefferson City, Missouri in three row plots with 1.4 m between 36 m long rows and 1 m between plants within rows. Before transplanting, the plots were fertilized with a 13N-5.6P-10.8K fertilizer to meet soil test recommendations. Plots were irrigated with a sprinkler system when necessary. At harvest, kiwano accessions were evaluated for fruit length, fruit width, fruit weight, and number of fruits per plant.

Cucumis metuliferus accessions seedlings varied significantly in the number of leaves and length of vines generated from the main stem (Table 1). Fruit numbers per plant varied from 101 for PI 414716 to 14 for PI 482441 (Table 1). Fruit production was concentrated within 50 cm of the main stem, thus, reducing the effect of vine length on total number of fruit produced. There were significant variations in fruit weight and fruit size between Cucumis metuliferus accessions (Table 1). The ripe fruit color was bright orange rind with a dark green interior. These colors varied only slightly between plant introductions. There were incidents of fusarium wilt in several of the accessions (PI numbers 292190, 482441, 482453,482456, and 526241). Selections of accessions (482442, 482454, 482444, and 526240) showing resistance to Fusarium oxysporum will be evaluated in further studies.

Selection of 10 Cucumis metuliferus accessions were evaluated on the basis of superior yield, disease resistance, and plant vigor. The accessions showing most promise were PI's 482444, 414716, 482455, 526240, and 482454. Crop yields were encouraging in 1990, however, concerns remain regarding the resistance of accessions to fusarium wilt.

zCucumis accessions selected for further evaluation on the basis of growth and yield. 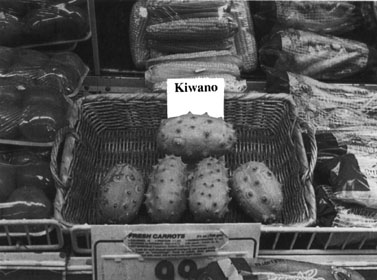