The Use of Protogyny to Make Hybrids in Pearl Millet

While cytoplasmic male sterility (CMS) facilitates hybrid seed production, the necessity of breeding CMS seed and restorer pollen parents which combine specifically, lengthens hybrid development time and restricts the possible combinations. In maize, these restrictions can be overcome by making hybrids by detasselling. In pearl millet [Pennisetum glaucum (L.) R. Br.], the protogynous nature of flowering can be used to make hybrids, termed pro-hybrids to distinguish them from CMS hybrids. The duration of complete stigma emergence, the protogyny period (see Fig. 1A) before anthesis (Fig. 1B) on pearl millet heads may vary between genotypes from 1 to 5 days. While choice of parent lines and careful management of pro-hybrid production fields will reduce self pollination in the chosen "seed parent," some may still occur. Prior research in hybrid/inbred mixtures in tall forage hybrids (Burton 1948,1989) showed that up to 50% inbred line seed did not significantly reduce hybrid performance. Tall grain hybrids made in West Africa by protogyny using dwarf populations as females with tall varieties as pollinators showed as much as 45% heterosis over check variety and less than 5% female selfing (Lambert 1982). Our research investigated, using one top-cross (TC) and 3 single-cross (SC) hybrids, what effect various levels of simulated "seed parent" selfing would have on dwarf pro-hybrid performance.

Yields of the 80:20 hybrid/inbred mixtures were not significantly different from the control (100% hybrid) in either the TC (Fig. 2) or two out of three SC hybrid tests (Tables 1 and 2). Actual yield reductions were 4.4, 4.1, and 6.3%, respectively. In the remaining SC hybrid (Table 3), the yield of 60:40 mixtures were not significantly different (-14%) from the control but, for no discernable reasons, the 80:20 mixtures (-22%) were significantly lower yielding. Heterosis levels were 20% in the TC hybrid over the open-pollinated cultivar parent, and 275, 70, and 260% over the best inbred in the respective SC hybrids. Experiments are underway with marker traits to determine the actual hybrid/self seed percentages occurring in pro-hybrid seed production plots, but selfing is expected to be less than 20%.

The use of protogyny in pearl millet appears to have potential for making hybrids, thus permitting more rapid hybrid development and a wider choice of parent combinations compared to CMS systems. The presence of up to 20% inbred parent seed reduced grain yields only 4 to 6% in top-cross or 2 out of 3 single-cross hybrids, probably because inbred plants offered little competition to hybrid plants. The use of parent combinations which produce a dominant hybrid phenotype compared to that of the "seed parent" will reduce the effect of any possible selfing.

This research was conducted using dwarf hybrids. Where tall grain cultivars are preferred, as in Africa were 12 million ha of pearl millet are grown for food, and where susceptibility to ergot is associated with hybrids made with CMS seed parents, this method of hybrid seed production provides opportunities for the rapid development of top cross hybrids using existing tall cultivars as males and adapted semi-dwarf or dwarf lines as protogyny seed parents. 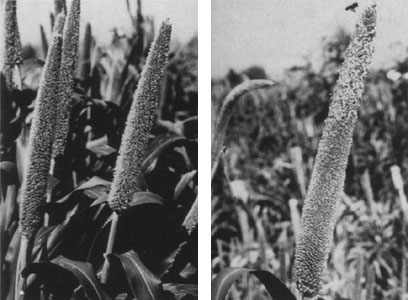 Fig. 1. (left). Pearl millet heads. (A) Protogynous heads with stigmas fully exerted prior to anthesis; (B) Anthesis following the period of protogyny.