Historically, the coastal area of South Carolina has been a region of great agricultural importance in the Southeast. Dating back to the seventeenth century, many crops, once considered alternative crops or new crops were introduced and became strong industries. Rice, then indigo, and finally sea island cotton were important crops in the region for two centuries. Vegetable production supplanted cotton production by the turn of the twentieth century. During the last eighty years, crops such as beans, lettuce, carrots, cabbage, greens, and potatoes were considered major crops; however, through a variety of reasons, competition eroded these markets. Presently, fresh market tomatoes are the major vegetable produced in coastal South Carolina, but the future of this industry is threatened by strong competition from Florida's growers, who are extending their production periods.

The search for new crops to supplement the income from traditional crops has followed many routes. Cut flowers are one of the alternatives being considered. Presently, a few growers in South Carolina produce snapdragons, gladiola, daylilies, and statice. Most of these flowers are sold directed to retail florists. Surveys of local retail and wholesale florists in Columbia, South Carolina have indicated that there is potential for local growers to produce and sell more diverse types of cut flowers. Barberton or Transvaal daisies, or simply Gerbera daisies (Gerbera jamesonii Bolus) are one of the top cut flower crops in Europe and in recent years have been steadily exported to the United States from the Netherlands, France, Italy, Japan, India, Australia, and New Zealand (Tjia 1984). Gerbera daisies are produced also in South America (Colombia), but the majority of these are exported to Europe and Japan (Tjia and Rogers 1982).

Gerbera daisies are a high value cut flower crop with retail prices as high as $3.50/stem. Growers could sell Gerbera cut flowers to a wholesaler for 25 to 40 cents/stem who would, in turn, sell the same stems to a retail florist for 40 to 70 cents/stem. Demand and price paid for Gerbera cutflowers is highest from Valentine's Day to Mother's Day.

Most gerbera cut flowers are produced in some form of protected structure. In the Netherlands, Gerbera cut flowers are produced on raised beds in heated greenhouses to protect from severe winter weather. Domestically, Gerbera daisies are produced in Florida in sawtooth or saran houses (Behnke 1984). Shade cloth is needed to reduce temperatures and to enhance stem length (Auman 1980). While some production is in open fields, the majority is produced under some permanent protective structure (B. Tjia, personal communication).

The coastal area of South Carolina has many aspects about its geography and climate that can be considered favorable to the production of field gerbera cut flower production. The area is an 8 to 9 on the hardiness zone. The summers are sub-tropical with sub-temperate winters. However, to capture the early Valentine's Day market demand, some form of protection is needed. The region has ample water, warmth, and productive soils unusually high in phosphate. Gerbera daisies are a popular bedding plant in the home landscape and over-winter without plant loss. They are one of the earliest to flower in spring, are extremely heat tolerant blooming through the intense heat and humidity of the summer months, and will bloom continuously to late November. As bedding plants, they are considered "easy" to grow. Geographical benefits include close proximity to the large metropolitan areas of Charleston and Columbia, South Carolina and Atlanta and Savannah, Georgia, and within easy reach of metropolitan areas north or south along the eastern corridor. Recently, local "pick-your own," vegetable farms have diversified their product lines and sell annual cut flowers, such as zinnia, marigold, and cosmos with great success. Customers are drawn to these stands by the splashes of bright colors of cutflowers. Perennial cut flowers, such as Gerbera daisies, could be a welcome addition.

Potential factors working against the success of this new crop are uncertainties of the cultural practices needed to produce high quality gerbera cut flowers in open fields. The basic fertility and population considerations to produce quality cuts are unknown and awareness of pest problems needs close scrutiny The floral industry has defined the level of quality the grower needs to satisfy. Florists demand large, showy blooms preferably 7.5 cm in diameter or greater. The many different types of gerbera flower forms include singles, doubles, crested doubles, full-crested doubles, and quilled types (Clay 1983). Florists seldom use singles in arrangements, preferring the fancier flower types. Stems should be sturdy and at least 30 cm, but preferably 60 cm in length. Blooms must be insect- and disease-free. Work was initiated in 1987 at Clemson's Coastal Research Center in Charleston to determine the appropriate cultural practices to produce quality cut flowers in unprotected culture in the open field (Fig. 1).

A two-year study evaluated the influence of nitrogen (N) and potassium (K) fertility and plant populations on quality cutflower production. Three levels of N (55, 110, and 220 kg/ha) and plant populations of 24,000, 36,000, and 72,000 plants/ha were factorially combined to produce 27 unique cultural systems. In the first year of production, we found that populations of 72,000 plants/ha can be used to produce cut flowers without loss of flower size and quality. At least 110 kg N/ha, was needed to enhance high yields (Table 1). Increasing the N rate to 220 kg/ha increased cull production with negligible increases in marketable yields. Nitrogen rate did not affect flower size or quality. At least 220 kg K/ha is needed to increase marketable yield, individual flower fresh weight and vase life and to decrease cull flower production.

Marketable and cull yield also increased with N rate applied in the second year (Table 1). In contrast to the first year's work, production was highest with 220 kg N/ha while K had no effect on yield. High populations of 72,000 plants/ha increased marketable yields. Levels of N, K or plant populations had no effect on flower diameter, stem length, flower fresh weight or overall quality. To obtain high yields of marketable quality, fertility regimes of 220 kg N/ha with at least 55 kg K/ha are needed. High plant populations of 72,000 plants/ha win maximize flower yields without adverse effect on flower quality and production.

Short stem length was a persistent problem in the fertility/population experiments. Stem lengths averages about 31 cm and 34 cm in 1987, and 34 cm in 1988. Fertility and plant spacing did not affect stem length. Research is ongoing to study the utility of shade cloth of 30, 47, 63 or 80% light exclusion to induce greater stem length. Portable shade cloth houses are placed over the beds during the growing season. The benefits to production and economics of utilizing shade cloth remain to be determined.

Normally in Charleston, gerberas bloom in early April. The use of row covers could increase early production to mid-February, and are currently being investigated. Although all row cover materials tested resulted in earlier production in January, 1989, the lengthening stems were abraded by the row cover materials and seriously damaged. Better designs combining row covers with higher clearance tunnels are needed.

POTENTIAL OF GERBERA AS AN ALTERNATIVE CROP

Thrip-induced petal striations and streaks are the major hindrance to quality flower production in coastal South Carolina. Various systemic and non-systemic insecticides evaluated were ineffective in controlling thrips and these compounds are not yet labeled for use with these crops. Before this new crop can be grown commercially, entomological studies are needed to learn how to control thrips.

The success of this crop in the market place will depend ultimately on the aggressiveness of the grower to pursue retail and wholesale floral markets. Quality must be demonstrated and price set to undersell the competition. Only a limited number of Gerbera daisies can be absorbed by local market outlets. Retailing through "pick-your-own" farmstands and farmers markets may be the best ways for the small grower to become familiar with growing the crop, developing a quality product, and establishing a good reputation in the market.

Floral trade experts expect that the boom in flower use by Americans will continue to increase. Americans spent about $21 per capita in 1986 for cut flowers (Levin 1987). Although our use of flowers still lags behind the Europeans, the trend of buying flowers for the home is moving the country closer to the European tradition. We expect that field-production of cut flowers will increase significantly in the coming years. 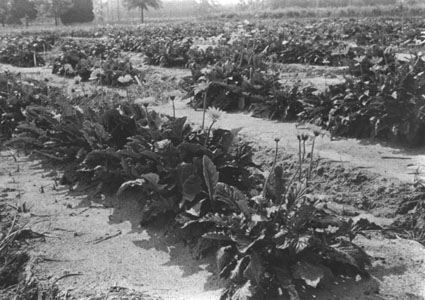